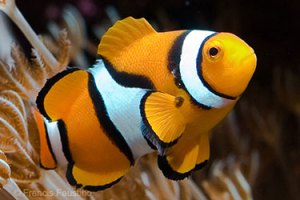 Hardiness
Good, if captive bred this fish is good for beginners. If this fish is wild caught then 6 months or more experience is recommended.

Behavior
A. Percula gets along well with other peaceful tank mates, but can become aggressive towards others of its species. If more than one A. Percula is to be kept in the same aquarium it is suggested that they be a mated pair, or are introduced to the aquarium when very young.

Feeding
Most meaty foods such as brine shrimp and mysis shrimp are accepted. They will also eat most flake, and frozen foods. Rotating the types of food you feed is a good Idea, this will keep the fish from becoming too picky.

Description
This fish has three white stripes bordered with black on a bright orange body. A. Percula is often confused with A. Ocellaris because of their coloration and stripe pattern. The discerning difference is that A. Percula has 9 to 10 dorsal spines, where A. Ocellaris has 11. A. Percula also tends to have a darker black border around the stripes. These borders will sometimes blend in with each other creating black areas between the stripes. This fish is found in Northern Queensland and Melanesia. It is readily available in the aquarium trade, and is sold as captive bred or wild caught. The wild caught A. Percula is more difficult to care for due to it being shipped from over seas, and is harder to acclimate.

Percula, as with most clownfish, breed by laying their eggs near their host anemone. The parents will defend the eggs and will occasionally fan them. After 8 days the eggs will hatch, about an hour after dark. The fry should then be removed so that predators and the parents will not harm them. The fry will need to be fed baby brine shrimp several times a day. Many of the fry will not survive to maturity.

One thought on “True Percula Clownfish”